The Atheist Academic: News Flash — Some Atheists are Assholes!

The other day, I was looking at my personal blog. I’ve got things on that that I wrote four or five years ago. It’s always a bit embarrassing for me to read through all that emotion that pours out as I write. In person, I’m cheerful and slightly inappropriate and my biggest defense mechanism is humor; in writing, I’m kind of dry and incendiary. Once, a guy whom I broke up with told me that my writing was myopic and maudlin; I was hurt, but then I was impressed that I dated someone who knew those words, so I let it go.

Anyway, I came across a post that was written when I first had the realization that I was an atheist. It was a big thing for me. For the first month of so with this new label, I was excited and terrified and pretty overwhelmed. Here’s how excited I was about it (and yes, you can laugh at me):

All my best thinking happens while driving from Columbus to home on route 33. That’s where I once got my idea for my future award-winning novel, which will begin with a monster rising up over the horizon. 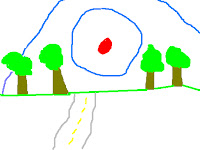 (That’s an illustration. Don’t you steal my idea.)

I’ve been really studying Atheism these last few weeks. I think that I can finally say, without reservations, that I am, in fact, an Atheist. The two Atheists that I have called friends for a long time are inspirational in the fact that they are confident and informed about what they believe, but they seem alone. I needed a network. I needed someone to argue for me, since I don’t argue so well. I want someone to guide me, to commiserate with me. I needed a high-five every so often. I didn’t have that, so I wallowed along in my beliefs, words like “humanist” and “nondenominational” and “spiritual” floating around in my head. I knew what I believed (or didn’t believe) but I didn’t have an outlet. I didn’t have homies backing me up.

Anyway, I’ve been reading atheist authors and I’ve been watching videos and debates on YouTube. I’ve joined Atheist groups on Facebook and have been in contact with awesome people who I can talk to about raising a child who’s not all Jesus-y and how to defend your lack of beliefs with Christians. There is a community out there – a community of people who know the truth. And here’s the thing: it really IS the truth. I feel sorry for religious people. I feel sorry for them for believing a silly book, tainted by misinterpretation and hypocrisy.

So, as I was driving down 33 earlier this week, I was thinking about my new world view, and I had a moment of clarity. I looked up at the clouds – dark and foreboding because of some impending storm – and I felt like I had meaning. I wasn’t submissive to some random guy I had never seen proof of. I wasn’t held down to morality because of what some book said. I have some finite set of years, and that’s IT. And that’s okay. I can have a purpose, not because I’m going to graduate to some other realm – I can have a purpose because this is all I get.  I can’t tell you how freeing that is. Some random set of reactions set this world into place so that there was human life. How amazing is that? MUCH more amazing, to me, than some random force creating me. Every possible variable had to be correct in order for me to exist. If all that happened in order to create me, I’d damn better make something of my life. I don’t get another go-around.

Suddenly, everything is so clear to me. I want to hold hands with Atheists and prance around, enjoying the vigor of life. I want to sit down religious people and say, “look how HAPPY you could be! you could live just to LIVE.”

I know that some people need religion in their lives. My mother is a devout Catholic, and prayer gives her peace of mind, and she doesn’t hurt anyone else by being religious, so I’m okay with that. But other people are hateful and hurt other people in the name of religion, and that’s wrong. It’s like beating up someone because they said something mean about the Easter Bunny – or because they believe in a pink Easter Bunny instead of a green one. And I am so much happier acknowledging the fact that there IS no Easter Bunny, and going to the store and buying my own damn Snicker’s bar.

Anyway, have a lovely day… and be good for goodness’ sake 🙂

So… that was me, all happy and full of life, or something. I was REALLY EXCITED to be atheist. It was this new thing for me, and I was so happy about all of the opportunities. And after I wrote that, I became involved in communities and I edited an atheist website and then I eventually joined the Skepchick nation and I work with some really awesome atheists. And we don’t all agree on everything, but we get along, and life is good.

But here’s the thing. There are people in the atheist community that are really assholes, as well. I don’t know if they’re assholes because they think they are living their lives the way that they should, or because they just don’t give a fuck about anyone else, but they’re assholes. This is really unfortunate. If this life is all we get — if we tap into that wonder and joy that Brand New Atheist Tori had — we should be all supporting one another and helping one another out, and not belittling and assaulting one another. There shouldn’t be in-fighting. Disagreements, sure. But there’s no need to be mean to one another.

Unfortunately, being an atheist has gone from being a source of joy to being just another way of dealing with the same kind of people that bothered me previously. In fact, I get even more flak from it. Now I’m a vocal part of the most hated minority in America. So now, not only do I get to be sneered at by random people in my life, I also get to try to speak to a group of people who understand what it’s like to not believe in a god, but who don’t agree about HOW to not believe in a god.

But I’d love to get back to how I was when I first embraced atheism. I want that hope. I want that wonder. I want to watch a spider spin a web outside my front door and then feel inspired to go inside and write some crappy, sappy sonnet about how wonderful it is that the damn spider exists. Now I just have to figure out HOW to get back there.

Pop Quiz - But She's Been Dead For Fifteen Yeeeeeears...

Pop Quiz: Where were you ten years ago?

Tori is a high school English teacher from Ohio (insert cheerleader kick here)! She is emphatic! She is skeptical! She is nifty! Her boyfriend says that they can get a potbellied pig someday and name him Bacon. She has a little boy whose pseudonym is SC, although he has recently asked that his name be changed to Henry. When asked for a comment to add on this bio, he asked, "Why do we sound like a bad '70's cop show?" So there's that.

An Aspect of Accessibility

Inexhaustive List of Jobs not Received with a Humanities PhD

Bathrooms: for trans students who have considered suicide when the rainbow is not enough